A Love Letter to Books & Imagination 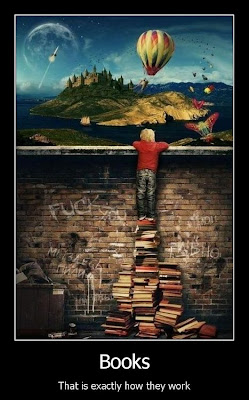 I happened across this brilliant short animation from Moonbot Studios this morning: 'The Fantastic Flying Books of Mr. Morris Lessmore'. If you love books and writing, you MUST see this. I was in awe, in tears and inspired to get more of my writing actually done and OUT there for readers.

Grab a Kleenex and give yourself over for a few minutes. Utter brilliance. I love the homage to Buster Keaton idea as well-- this is truly a thing of beauty.

When you're done, dry your eyes, turn off the computer and grab a book. Or, if you must stay on the computer, open up a Word file and start writing.

But first, click below and watch this wonderful gift from Moonbot Studios:

I have been getting excellent feedback from readers so far on Base Spirits. I had a lovely e-mail just yesterday- what writer wouldn't want to get this in their in-box?

"Finally got to sit down and read your book... and I read it all in one day!!!! I am generally known as a boring old lady who reads only non-fiction... (don't think I have read fiction since high school). Three weeks ago I got up on Sunday morning and began to read... and I read ... and I read ... and I read until I was done the book. Just couldn't put it down. I really do not like the word "awesome" but that is the only word I can think of right now to describe your writing. The book had so many little twists and turns I couldn't wait to see what was "right around the corner."

This gives me confidence. One gains an audience one reader at a time, and that kind of enthusiasm is (I hope!) contagious. Almost across the board, I've been told it's a page-turner and I'm keeping folks up nights. Hey- they like me!

The KDP Select experiment has worked in many ways so far. I decided to do the free giveaway promotion in spurts rather than the whole 5 days at one. I had around 40 downloads the first day of my 2-day giveaway, and well over a thousand the second day! Considering I was so under the radar I was invisible, this is good news. I even reached the 'Top Ten' in my 2 categories of 'ghost story' and 'historical'. It was pretty cool to be on the same page as Edgar Allan Poe.

Since then, there has been a spike in sales- not huge, but definitely an encouraging improvement over the relative inactivity at the end of 2011. I am going to band together with some other writers and do a kind of cross-promotion KDP giveaway in March, so we'll see how that goes. It's the Wild West after all, right? I'll let you know details closer to the time. We're still just scheming right now...

If you're curious to see what keeps people glued to the pages of Base Spirits, have a look here:
http://www.amazon.com/Base-Spirits-ebook/dp/B005L38G8E
I'd love it if you would at least 'like' the book and agree with some of the tags. Every little bit helps, and that doesn't cost you a dime. And if you are an Amazon Prime member, you can borrow my creepy historical ghost thriller for free. Win/win!

If you are one of the many who grabbed a free copy, I do hope you like it. If you do, please consider revisiting the Kindle page and leave a rating/review. As I say, this is a case of winning a reader at a time. The more people who become aware, the better. Thank you.

Meantime, I am fiddling with some shorter works so that I can put up some new things on Kindle before too long... quick and creepy fare is on the way!

My KDP Select Experiment with Base Spirits

So, after sitting on the fence to see how it was working for other writers first, I decided to take the plunge and try the KDP Select program for 90 days.

For those of you who are unfamiliar, the details are here: http://kdp.amazon.com/self-publishing/KDPSelect

Despite the benefits offered, I'm not altogether happy about the exclusivity demanded by Amazon: I resist any attempt by an already powerful company to dominate a market and dictate the rules. It would be easier to take if I had a number of books, but I only have one available so far. (I am working on a new novel and getting a few shorter works ready, but that's another story-- stay tuned!) Those who have a number of titles can use KDP Select to push one that is losing its momentum and still have their other work available everywhere. It still sorta sucks, though. If it was a traditionally published book, would it not be available in any bookstore?

But the pros outweigh the cons in the end. If I find I don't like it, I can always opt out in 90 days. Frankly my sales on Smashwords & affiliates were very low, so I doubt anyone will be too miffed to find my book is temporarily unavailable. The lending library's pooled fund will pay me almost as much for a borrowed book as an actual sale, and the free promo days will hopefully garner attention and new audience. I really just need to get the word out and get people to read and then talk about my novel. It's simple, really.

I know Base Spirits is a good book. The word of mouth feedback and reviews have all been excellent. I just had another nice e-mail stating 'My husband gave me a signed copy for Christmas and I had to tear myself away and force myself to turn out the light and go to sleep-- and I finished it the next day before dinner'. The general consensus is that it's a page-turner and a chill-ride, so if you like ghost stories then chances are you will enjoy my novel.

And you can grab it for FREE on Kindle on Jan. 13 and 14th! http://www.amazon.com/Base-Spirits-ebook/dp/B005L38G8E Please 'like' the book on its sales page and tick off some tags while you're there. Apparently that helps! And please pass on the word to your ghost-loving reader buddies. Tweet, share on Facebook and Goodreads or any forums or readers' groups you belong to. I'd love you for it. And if you love the book, please come on back and leave a review. That is hugely appreciated!

If you miss the freebie, stay tuned for more to come... and in the meantime look into borrowing it through the Kindle Lending Library- http://www.amazon.com/gp/feature.html/?docId=1000739811 It's free for Prime members, and it would make little ol' me-- and the thousands of other authors who have great books available-- really happy! Hell, even just take the plunge and buy it. You can't even get a really good specialty coffee for $2.99. And think of all the good karma you'll get along with your chills and thrills!
Posted by Ruth Barrett at 7:42 PM No comments:

Happy 2012 to everyone! I hope that this year brings you excellent health, abundance and happiness in all that you do.

It's a time of year when we look back and reflect upon the past 12 months. What were you doing a year ago? How far have you come since?

Me? I don't remember the first week of 2011. At all. I had a bad flu which led to me suffering a terrifying condition called hyponatremia.  http://en.wikipedia.org/wiki/Hyponatremia If my friend Craig had not been present when I collapsed in a delirium on January 2nd, I would not be sitting here right now writing this blog entry. As it was, I landed in ICU and a coma was induced for the best part of a week while Craig, my brother Dave and my Mom sat vigil. They'd been warned that I may not wake up, and if I did the chances of my being severely brain-damaged were high.

Obviously, I came around. Recovery took over a month.

To say this was horrifying is an understatement. I am glad I don't remember many details. But this was the third dance with mortality in as many years for me due to medical conditions (the other two bouts being due to pulmonary emboli in 2008). Despite the odds, I am still here.

I took the hint that life is short in 2011. I decided to stop pursuing the traditional publishing path and try my hand at indie publishing. Base Spirits (http://www.amazon.com/Base-Spirits-ebook/dp/B005L38G8E/ref=sr_1_1?s=digital-text&ie=UTF8&qid=1325623793&sr=1-1) was a long time coming, but it's here and I'm proud of it. In the coming year I intend to see it make an impact with readers as I work on getting more writing out in general. I'm pleased to announce that my short story 'The Transformation' was accepted for the Dark Light anthology coming out in March from http://www.crushingheartsandblackbutterfly.com/ So far, so good. I have a few works in progress of various lengths. I will share them as soon as they are ready to be seen.

Not only was 2011 a personal struggle with health, but the wider world seemed to be going insane (more than usual!) Politics-- both here in Canada and abroad-- have taken strange and sometimes worrying turns, and the international economic turmoil and power struggles seem to be building toward a pitched battle between the forces of Good and Evil on a very fundamental level. I have felt the weight of the world very much this past year and it had me feeling battered and torn at times.

First, in the words of Douglas Adams, "Don't Panic". It's short and sweet, and covers most issues one may find themselves facing, large or small.

Second-- and more heartfelt-- are the parting words from the deeply mourned Canadian politician Jack Layton http://en.wikipedia.org/wiki/Jack_Layton He had his own, very public battles with bad health in 2011. Unfortunately for us all, Jack lost his fight.

This love letter to Canada can be found in its entirety here: http://www.ndp.ca/letter-to-canadians-from-jack-layton Wherever you live and whatever your political leanings, it is well worth reading and applying to your own life.

So my friends, let's all have an excellent year and change the world... if only in small ways.
Posted by Ruth Barrett at 12:51 PM 2 comments: