Base Spirits is Now Available!

WOOT! It's a bouncing baby novel! (And that's sort of funny in a really sick way, once you read the book... sorry in advance for the truly awful humour.)

I have uploaded Base Spirits onto Smashwords! You can find it here: http://www.smashwords.com/books/view/84640

I'll be following up with Kindle and Nook tomorrow, and I plan on making a print version available on Amazon in due course. The files are with my local printers so I can release it around town-- aiming for early October.

Whew! I had a little celebration by going to an amazing afternoon opera concert-- a few of Canada's finest, singing some of the best 'warhorse' arias and duets. Incredible stuff. I'm still resonating to the core. I sure felt like belting out some joyful sound after finally getting my book out there, but that's best left to the experts!! Maybe now I need some of this: 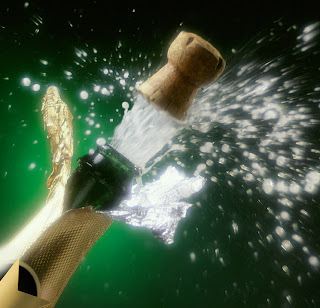 Or perhaps-- in true decadent author's style-- I should have this instead, and then try to finish writing 'Kubla Khan'... 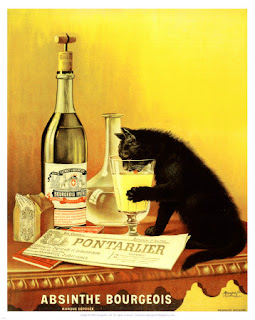 Great ad, isn't it? Not sure I'd feed it to a cat, though. Cats are weird enough without getting them all freaky on Absinthe. But they're a good kind of weird.

Please take a look at Base Spirits. If you like it, spread the word and post a review. If you're another writer and you'd like to do some cross-promotion, we should chat... leave me your contact e-mail below.

Posted by Ruth Barrett at 2:11 PM No comments:

I have the electronic files of Base Spirits back from the formatter. All is well. I could-- in theory-- stop typing this and go be e-published in a matter of an hour (if that).

The labour pains are starting...

I find myself hesitating. Not because I doubt that my book is worth sharing, but because... well, I don't really know.

Give me a minute.

Strange place to be in my mind right this moment-- though many would rightfully argue my mind is a bit strange most of the time.

You are about to meet a motley bunch of players... I know you won't be able to like all of them, but I hope you find them compelling and entertaining.

Watch this space. I'll be back when there's a book for you... Email ThisBlogThis!Share to TwitterShare to FacebookShare to Pinterest
Labels: Base Spirits, e-publishing

Calm Before the Storm...

Base Spirits underwent a thorough nip-and-tuck by my hand, and then my editor Heather Sangster (http://www.strongfinish.ca/) took her virtual red pen to it. She called me mid-week, raving about what a great book it is, and that she'd barely had to touch it. Gotta say that felt good!

I was assigned my ISBNs just in time to send everything to my formatters this weekend. (http://www.52novels.com/) I should have all of my files for both e-book and print format ready to go on the last week of August. I think I found a local printer to do my paperbacks... I'll let you know how that goes. I'm starting to plan a kind of launch party, and have lots of people happy to offer help and space and goodies to give away. People in this community are very keen on creative projects. I like my town!


So now I'm planning ahead-- looking into some cross-promotions, guest blogs and interviews to get the ball rolling. One of the very best things I've discovered so far in my decision to 'go indie' is that ALL of the other writers I've had the joy to interact with-- mostly unseen and unmet via the Web-- have been very supportive and generous. Suddenly, the writer's life does not feel so lonely and isolated. We are a tribe. We're all in this together, and it's not a competition. If I help you sell a book, or find a cover artist or an editor, or someone else asks me to guest blog or offers to set up an interview for me, we *all* win. Hell, if we just make a joke or cheer on one another's progress that is worth more than gold. I even got a personal note of encouragement from John Locke today (http://lethalbooks.com/) so that puts a spring in my step!

Overall, I'd have to say that my step has been noticeably springier since I decided to take the plunge.

Ironically, I got a rejection e-mail from a small UK publisher just as I received my ISBNs. I'd totally forgotten I'd submitted to them back in February! Instead of the usual reaction of a sick, plummeting feeling in my gut, I actually threw back my head and laughed. That is the LAST time I'll ever read the dreaded words: "Dear Ruth, Thank you for submitting Base Spirits for our consideration. We really enjoyed your novel, and while we recognize its merits and your skills as a writer, we are unable to offer you publication at this time... "

And you know? It felt great to reject the rejection. It simply doesn't matter now.
Posted by Ruth Barrett at 7:10 PM No comments: 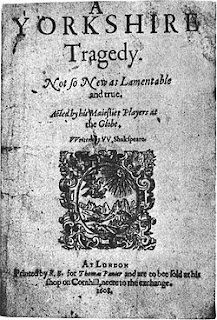 As the launch of Base Spirits looms, I feel a need to address the portrayals of the two abusive husbands in my novel. Sir Walter Calverley is a creature of his time-- though I see enough sad tales in the news to know that such men do still exist. (As the original cover above says, it's 'not so new as lamentable and true'.) Happily for me, the monster in my book is in no way a version of any real person I've ever known. I did 'live' the part of Phillipa Calverley in the stage version of the central story, A Yorkshire Tragedy, and had to 'be' an abused wife who sees her children torn away. Thankfully, the only Sir Walter I've had to endure in my life has been a fellow actor's interpretation! All was forgiven in the pub after the curtain.

The other husband of note in Base Spirits is Professor Scott Atkinson.

Here's where real life has had some influence: my ex-husband is an English professor. At first I resisted the idea of writing Scott as one, but his character more-or-less presented himself to my Muse as a scholar, and it made good sense for the context of the narrative. The two of us actually did find and visit Calverley Old Hall during a trip for an academic conference, about the time I was in rehearsals for a Summerworks production of A Yorkshire Tragedy. In my book, there is a tension between the scholarly path and the writer's experience, but that is greatly exaggerated and not specific to my real-life interaction: I witness that eternal clash of cultures time and time again in my circles of theatrical pals and academic friends. I do NOT want to give the idea that Scott is supposed to 'be' my ex. I would hate anyone to think he was ever abusive to me. True, our marriage was not a success; but it was not in any way the violent train-wreck of the fictional Scott and Clara!

If anything, there are a couple of very positive attributes my Scott character has in common with my ex: they are both boyishly enthusiastic about the literature that they study, and both possess an uncanny knack for memorization. Other than that, my ex-- thank GOD-- is nothing like Scott! We both moved on a million years ago and I sincerely wish him nothing but joy in life.

The names for my contemporary main characters were derived from Calverley itself: there is a Clara Road in the village, and the original name of the resident noble family was 'Scot de Calverley', which was shortened over time.

Where do the explicit portrayals of such violent men come from? Essentially, I found them lurking deep inside myself. As my dear departed friend Timothy Findley used to say 'We are all of us a hiding place for monsters'.

And keeping with the Can-Lit quote theme... to paraphrase Margaret Atwood: 'Sometimes we just make things up'.

I've always likened writing to having a bag of material to sew into quilts. I am a scrap-gatherer collecting bits of 'fabric' from my reality: an angry, unblinking eye; the incessant jangle of keys in a pocket; the tilt of her head; the inflection in his voice... it all goes into my scrap bag. Bulging with images and gestures, turns of phrase and mannerisms, moments of shock and pleasure, the bag sits and waits for me to start the selection-- trimming and piecing, pinning squares together to sew into a crazy quilt. None of the patchwork makes sense on its own until it is part of a whole. The owners of the original fragments may not even recognize it as theirs, and for the most part that is for the best.