I was asked to write a blog post on 'The Baptism of Fire' experience of indie writers for 'Adopt An Indie' month. http://adoptanindie.com/

In my own case, I wouldn't say it's been so much a baptism of fire as a strangely niggling slow burn.

I'll give you a real-life situation as a metaphor-- writers do that sort of thing:

I once worked as a server in a Greek restaurant. One of the appetizers on offer was Saganaki. In case you haven't had the experience, it is a slab of hot 'n' nasty cheese on a sizzling platter. The server is meant to rush up to the table, dump a shot glass of vodka or ouzo over it and immediately light it on fire, yelling 'Opa!' to the delight of the table of diners. Flames shoot up in a eyebrow-threatening column and die to a lurid blue sizzle as the platter is then squirted with a lemon wedge and set down ("Careful- it's hot." No shit!). Then the gelatinous salty guck is spread on bread and consumed-- one suspects-- with gusto. 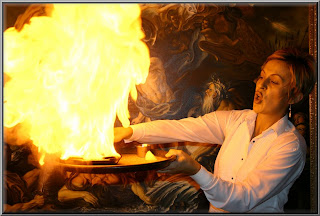 The place I worked at was run by cheapskates. The bartender had been instructed to dole out the barest minimum of booze to the hapless servers (only the few old warhorses who'd worked there forever got the full shot). Not only was this a rip-off to the customer who has presumably been charged for a whole shot, but it is really a hit or miss situation for the poor person trying to jump through hoops for a decent tip to make up for the humiliation and potential hair-loss.

On a busy Saturday night, after one of the old waiters had just wowed the table next to mine with a nuclear mushroom cloud of a Saganaki (thus the politically incorrect reference by the staff to the hated appetizer as 'Nagasaki') -predictably, the children at my table clamored for the same. I was grudgingly given the merest drizzle of ouzo in a greasy shot-glass and ran to my customers with the platter sizzling. All eyes were upon me-- the kids beaming with gleeful anticipation-- as I theatrically dribbled the ouzo over the cheese, deftly flicked my lighter over it as the table joined me in shouting a hearty 'Opa!'

The flame barely fizzled and immediately went out. I set the platter down amid the downcast children and scuttled away.

Do you see where this is heading? For me, the act of 'Going Indie' was nothing like the 'baptism of fire' that it can be. If you let it get to you, the idea of putting your work out without a net could be daunting to some folks. I personally did not find it intimidating-- I found it liberating. No more carefully-worded submission letters and researching agents and publishing houses. No more endless rounds of belly-crawling submissions, waiting, rejections... wash, rinse, repeat ad nauseum. And for what? So that someone else chooses an editor and cover art and holds me hostage for 18 months before the book is released? All so I can hope to God that they know what they are doing so that I earn back my advance-- if I even get one. That route wasn't for me.

I see the way things are heading in the publishing industry. The e-book is taking off. E-readers will be THE big holiday gift this year. As a result, bricks and mortar publishers are even less likely to risk taking on an unknown author. But? The potential for an independent writer is grand: we can get our books out with little-to-no overhead, without a long wait, without trying to play to the taste of gatekeepers who decide for the world what should be read or not. So long as we've written a good book, had it professionally edited, taken care with the formatting and put a nifty cover on it... well, we authors can put out something to be proud of, and then let the readers decide if it's worthy or not.

Well, that side of it was 'easy'. I relished the build-up, the fine-tuning with my editor, cover designer and formatter, and found the uploading of files a simple process. I got onto Twitter and built up followers and follow-ees, I created a Facebook page, I started a blog. I've guest-blogged, hosted, been interviewed in magazines, on the radio and on-line, I've involved myself with cross-promotions and giveaways and chat boards. I found a local printing house so that I could economically release small batches of Base Spirits in paperback. Sales of the actual physical book went well at the launch, and a local businessman ordered 40 copies to give away at his office Christmas party. I have had nothing but breathlessly enthusiastic feedback about how much people love the book-- how it kept them up nights. A page-turner. A thrill-ride. Wow.

Now how the heck do I turn that into on-line e-book sales?? On the surface, I have been getting myself out there-- but I've sat there watching other Indies arrive at the table and shoot straight up the Amazon charts in a ball of flame... as I hold my sizzling platter and wonder what happened.

But? I choose to see a slow burn as the more realistic outcome. With such enthusiastic reaction to my novel, the smolder will catch and flare up ere long. To other writers I say you have nothing to lose and everything to gain. But be patient and persevere. To the readers, I say thanks-- and aren't you living in exciting times? There has never been such a banquet of new books to discover-- and without having to pay $15 to $25 on a new author, you can read more, and experience so much more wonder. And readers? Your reviews and word of mouth are the best marketing. If you discover a book you love, pass it on!

Twitter: https://twitter.com/#!/LadyCalverley
Amazon: http://www.amazon.com/Base-Spirits-ebook/dp/B005L38G8E/ref=sr_1_1?s=digital-text&ie=UTF8&qid=1315163319&sr=1-1
Smashwords: http://www.smashwords.com/books/view/84640
Paperbacks can be ordered from my local indie Stratford bookshops, and can be personally autographed before shipping upon request:
Fanfare Book: fanfare@cyg.net
Callan Books: jcallan@orc.ca
Posted by Ruth Barrett at 6:42 AM No comments:

Of Birthdays, Paperbacks and Reviews


Thank you to my wonderful guest authors! Throughout October, the blog played host to some chilling and poignant true ghost stories. Please have a look in the archives if you missed them- worth a read!!

Today is my birthday. This year has been the best of times and the worst of times-- literally. This birthday almost didn't happen due to a serious flu that nearly took me out in January... but since then my health is back, and I've released my first novel. It's been a hell of a ride. I can only wonder what this coming year will bring. I started today looking out over the river while my coffee brewed: a murder of crows were conversing among themselves in frost-tipped trees below my window. I choose to see this as a good omen. Black is my colour.

I held a book launch for the paperback version of Base Spirits last month, and it was a resounding success despite damp and chilly weather. People came from far and near to help celebrate. Many books were sold. A party was had.

The book is available in e-format, but if you'd like a paperback 'real' book, please contact either of these two splendid Stratford indie booksellers: Callan Books-- jcallan@orc.ca or Fanfare Books-- fanfare@cyg.net The booksellers know me, so if you request a personal inscription, they will call me in before the book is shipped to you!

I've also had some great reviews on Amazon... and this excellent one from Easily Mused. A good birthday gift for me! http://easilymused.com/2011/10/book-review-base-spirits/